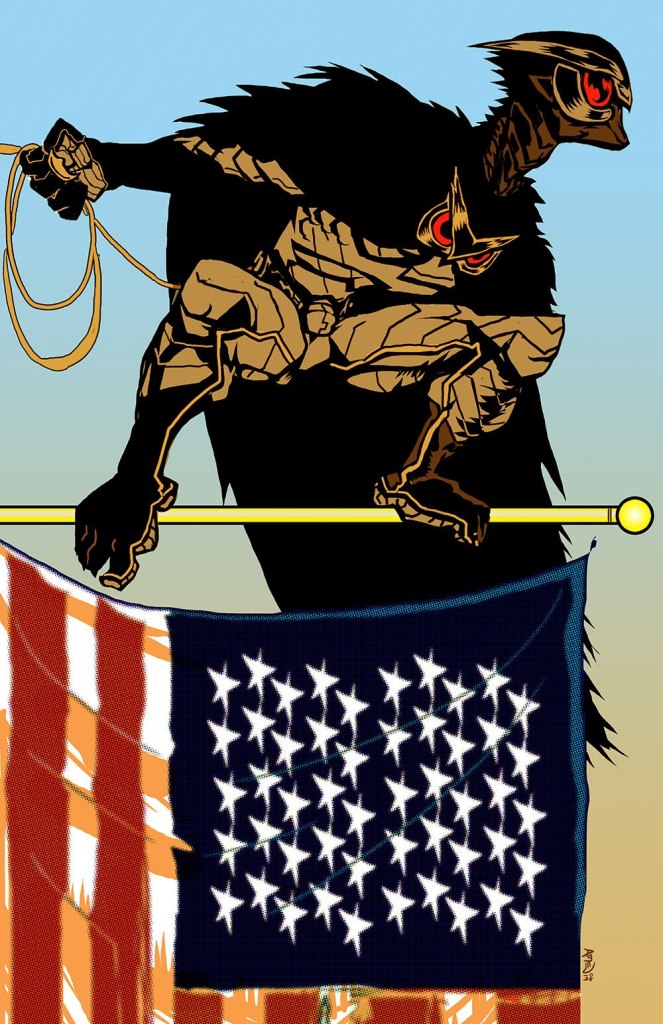 This is another update of a public domain superhero. Actually, it’s kind of a mash-up of two superheroes.

THE BLACK OWL was created in 1940 by Robert Turner and Pete Riss. He was Doug Danville, described as “a bored and wealthy playboy,” who one day “decided to add meaning to his seemingly pointless life by fighting the criminal element hand to hand.” Thus he created a costume and a name and began doing just that.

I’ll note that this origin story was rather common among non-powered costumed vigilantes of the Golden Age of comics. Although clearly inspired by Batman, few were given origins or motivations that matched his, nor put in the work necessary to develop his crime-fighting skills. They simply decided to fight crime, put on a costume, and began fighting crime.

Anyway, this version of the character lasted until 1943, when the publisher decided to write Danville out of the series and have a man named named  Walt Walters, who was already appearing in stories where he was the father of two teenage superheroes called Yank and Doodle, take on the name and costume so he could join his sons fighting crime. That version was published until 1947, when the publisher folded and the character eventually lapsed into Public Domain. This is the character that I’m mostly adapting for mine.

Also in 1940, Frank Thomas created a superhero called The Owl. He was Nick Terry, a police detective who became a costumed crime-fighter “so that he could more freely protect his home city of Yorktown from criminals.”

This character was originally published until 1943, and was briefly revived and published in the 1960’s. The main thing that I’m taking from this character is the design of his full-face mask. Also there’s the fact that this hero was more known to also rely on using several high-tech gadgets to aid in his crime, much like Batman, including traveling in a flying “Owlmobile”

You can read more about both characters HERE and HERE

Well, I decided to update the character. And since he had the word “Black” in his name, although I’ve changed it to Ebony so it can be unique, I decided to make him an actual Black man, as well to update the costume since both of those original designs were, in my opinion, pretty lame.

My version is Doug Walters a young Black man who grew up loving two things: computers and comic-books. While in college he and his dorm-mate Nick Terry co-created an Internet dating app called DICE, which they dropped out of college to run. After a few years of success, they sold the app to a larger software company, for millions in cash and stock options. So at the age of 23, Doug now found himself independently wealthy. He then proceeded to do what most 23 year olds would do when given several hundred million dollars: started living it up! He bought a mansion in Bel Air and a Penthouse suite in Manhattan, along with a private jet, a yacht,  and several fancy cars. He became well-ensconced in the wealthy social scene on both coasts, known for his lavish parties attended by models, movies stars, and other celebrities and socialites.

But after a couple of years of that he started to get bored, and felt like he was wasting his life (and his fortune). One day while sitting alone at home he started going through the extensive collection of comic-books that he’d also amassed over the years. As he pulled out the mint copy of Detective Comics #27, which he’d paid over a million dollars for, he suddenly realized what he really wanted to do with his life: become a real-life superhero!

Doug had a fully-functional gym, with all of the best weight-training equipment and a boxing ring for sparring, built into his mansion, hired a team of expert Cross-fit trainers to get him into the best physical shape, along with a live-in cook who specialized in health food so he was always eating right, and even got a high-priced doctor on-call to give him regular checkups (and to provide him with a safe amount of steroids). He also hired a group of Israeli former Special Forces soldiers to come train him in the martial art of Krav Maga, which he specifically chose for it’s emphasis on “real world fights” as opposed to professional matches. With these trainers he spent the next two years training and working out almost every single day (that’s why he hired multiple trainers so that they could rotate days working with him to give themselves time off), only taking off a day or two a month to attend special events and parties, just to maintain his “playboy” image. After two years of intense training he was as physically fit as an Olympic athlete and a well-honed fighting machine, now ready to begin his new secret career.

Sending some ideas to SAMAX AMEN he came back with the image at the beginning of this post, which I think is totally awesome. I think this character has much potential.