Like most people, I first became aware of the character of BLADE via the trilogy of films starring Wesley Snipes. For whatever reason, Marvel has never been able to fully capitalize on the character in the comic-books. In my hypothetical dream world I’d love to be given the chance to write an ongoing Blade series, and I’d like to have it published and Marvel’s now-defunct MAX line, so that the series could be R-rated, with cursing, nudity, and excessive violence.

My basic idea is that I’d take Blade out of his somewhat limited role as a “vampire slayer”, and expand his goal towards fighting other supernatural threats (werewolves, zombies, monsters) and even super villains, in addition to fighting and killing vampires. He’d be a bit more similar to Wolverine rather than Buffy.

Admittedly, I don’t have any significant details worked out, mainly because I know it’s just a pipe-dream. But I’d try to give him some kind of civilian identity, maybe running a local MMA gym or something, that will give him a regular supporting cast beyond just a weapons-master like Whistler. I’d also introduce a love interest. Although one scene I have in mind is Blade getting seduced at night by three “vampire brides”, and having having sex with all three of them they try to kill him, but he pulls out his sword and chops their heads off.

Another scene I have in mind is Blade vs. a gang of young Vampires called The Lugosi’s, who all dress up like Bela Lugosi in the classic Dracula film.

The above image I commissioned from CELINA HERNANDEZ, the below image is from SAMAX AMEN: 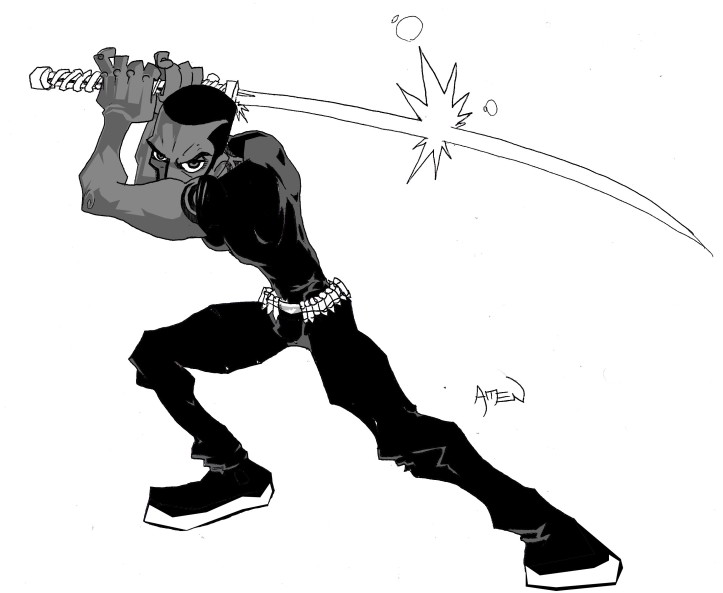